Are you looking for a new, fun breakfast idea? I have something for you, cinnamon roll dippers. Imagine a cinnamon roll but as a stick. With every bite, you can choose to dip in frosting or maple syrup.

Easy breakfast in the air fryer

Breakfast time can be a challenge for many. Don’t want to eat, not hungry for this or that,… I am constantly searching for better, different ways to present food. Yes, trust me I would love to have homemade cinnamon rolls from scratch on a Wednesday morning. However, not always a solution. These air fryer cinnamon roll dippers have given me an opportunity to change how I present food to my family. This recipe is no different. Simple, quick, and loved by everyone, it will keep mess to a minimum and can even be packed for lunches. 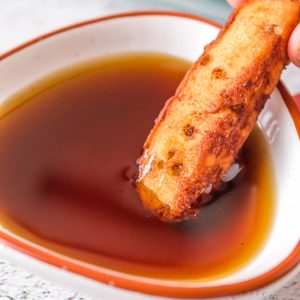 After years of cooking and baking with my girls, where even dad shows up from time to time, especially for BBQ. The Kitchen Bucket List was created.
I hope you enjoy these Simple, Easy, and Tasty Recipes with your friends and family.